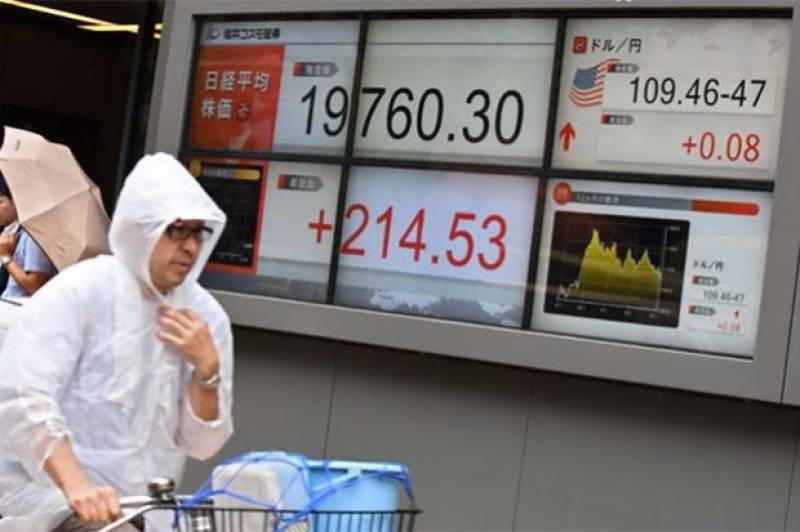 London (Reuters): World stocks were set for a sixth session of gains on Monday, extending a recovery from a selloff sparked by fears of creeping inflation and higher borrowing costs.

Gains were marginal however, and scored largely in Asian markets, with Japan’s Nikkei 225 up 2 percent. European bourses gave up initial gains to turn lower, with the pan-European STOXX index down 0.2 percent.

Trading was slower than usual due to market holidays in the United States and China, but moves in the steel sector were pronounced in the wake of the US government outlining proposals for hefty import curbs.

Shares in Tenaris, Outokumpu and Arcelor Mittal - which have facilities in the United States - were the biggest gainers in Europe, up between 2.2 and 4.6 percent.

The MSCI world index, which tracks shares in 47 countries, was up 0.1 percent. The index has recovered nearly half of its losses from late January to last week’s low, posting a gain of 4.3 percent last week. That was its best weekly performance since December 2011.

The rebound came after a two-week rout that wiped off over $6 trillion in global stock market value at one point, triggered by worries of a rise in US inflation.

The sell-off took place even as the corporate earning outlook improved on the back of strong global growth, bringing down equity valuations off highs hit earlier this year.

Just before the market ructions in late January, world shares were trading at 16.66 times their expected earnings, the highest levels since 2004, according to Thomson Reuters Datastream. They are currently at 15.33 times.

“Market confidence often attracts even more market confidence, and that is what we are seeing at the moment,” said David Madden, markets analyst at CMC Markets.

“The cooling of the volatility index (VIX) has given some dealers the green light to buy back into the stock market, and while the fear factor keeps sliding, it is likely equity benchmarks will continue to push higher.”

Equity investors have drawn some reassurance from a fall in the VIX - a measure of implied volatility on the S&P 500 index, also known as Wall Street’s “fear gauge”.

The index has remained below 20 for three days, last reading at 19.46. It spiked to a 2-1/2-year high of 50.3 two weeks ago, a jump that caused massive losses among investors who bet equity markets would stay stable on a combination of solid economic growth and moderate inflation.

That marked an outperformance of euro zone peers, with yields across the currency bloc creeping higher in the absence of any fresh drivers.

The US 10-year Treasuries yield closed at 2.87 percent on Friday. It had risen to a four-year high of 2.944 percent last week. Treasuries are not trading Monday due to the holiday in the US

The two-year US yield hit its highest level since 2008 last week as investors bet the Federal Reserve would raise interest rates at its next policy meeting in March. The US cash bond market is shut on Monday for a holiday.

The minutes of the Fed’s last policy meeting, held amid the equities tumble on Jan. 30-31, are due on Wednesday. Besides the outlook on rates, markets will be keen to see what, if anything, the Fed makes of the gyrations in markets.