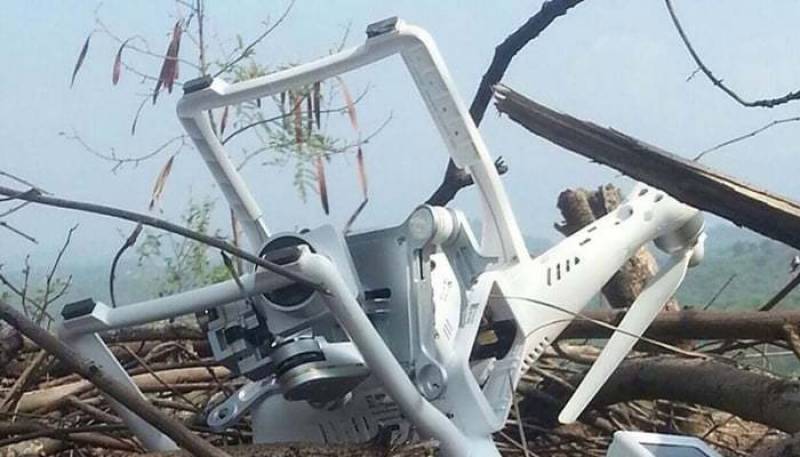 Rawalpindi (Staff Report): An Indian quadcopter spying across the Line of Control (LoC) was shot down by Pakistan Army on Friday, said a statement issued by Inter-Services Public Relations (ISPR), the military’s public relations wing. The drone was shot down in the Rakhchikri sector of the LoC and the wreckage has been recovered by the Army.

The wreckage of the drone is under the custody of the Army, likely for analysis.

The shoot-down of the Indian drone comes on the same day as the Foreign Office's opposition to the sale of US drone missile systems to India on the grounds that the move will disturb the balance of power in the region.

This is not the first incident of Indian drones violating Pakistan's airspace, with the Army shooting down drones in the LoC area on previous occasions.

On November 19, 2016, an Indian drone was shot down by Pakistani troops at the Aagahi post area in the Rakhchakri sector.

The then DG ISPR Lt. Gen. Asim Saleem Bajwa had said the quadcopter had intruded 60 metres inside Pakistani territory.

The Army has taken the wreckage of the drone into custody.

In another incident on July 15, 2015, an Indian spy drone, used for photography, was downed in the Bhimber area near the LoC after intruding into Pakistani territory, the had ISPR said.

The drones are often used by Indian forces to spy and map Pakistani positions along the LoC and to determine troop dispositions.

Tensions along the LoC have significantly increased after the right-wing government of Narendra Modi came to power in India.

Firing across the LoC has become a regular practice by Indian troops and has inflicted material and human losses on the Pakistani side of the border.