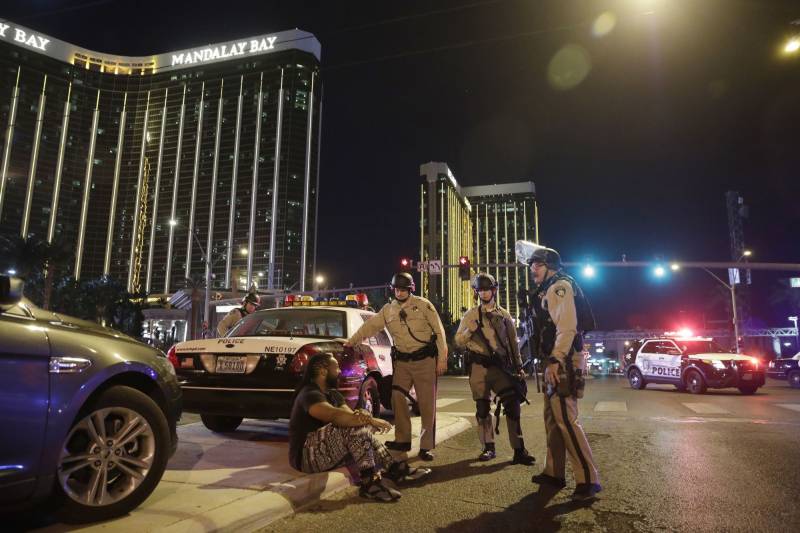 Las Vegas (Web Desk): Stephen Paddock, who sent bullets and terror down on thousands attending a Jason Aldean concert in Las Vegas, had an arsenal in his 32nd-floor hotel room and at his home 80 miles away, officials said.

Authorities said Paddock killed 59 people and injured another 527 early Monday in the deadliest mass shooting in modern US history.

In the hours after the retired accountant committed the shooting, authorities rolled out frightening new details, including the discovery of scopes on rifles at the resort and explosives at his home.

But what they couldn't explain is why the man who had never faced any notable criminal charges did it. There was no known motive late Monday.

Even Paddock's brother had no answers.

A team of six officers spoke with security at the Mandalay Bay Resort and Casino, where Paddock was staying, and searched the hotel floor-by-floor Sunday night before they found Paddock's room, Clark County Sheriff Joseph Lombardo told reporters.

Another 19 firearms, along with explosives and several thousand rounds of ammunition in Paddock's Mesquite, Nevada, home. The gunman apparently had smashed out two windows to increase his range of targets.

The sheriff said a SWAT team was standing by at a house in northern Nevada. A law enforcement official confirmed the FBI is present in Reno.

Several vigils were held Monday night to honor the victims of the shooting. Communities came out in Reno, Las Vegas and at the campus of University of Nevada Las Vegas.

Sandra Casey, a special education teacher in Manhattan Beach, California, was killed, the Manhattan Beach Unified School District said. "We lost a spectacular teacher who devoted her life to helping some of our most needy students," school board President Jennifer Cochran said.

Sonny Melton also was identified as among the dead. His employer, Henry County Medical Center in Paris, Tennessee, said Melton was a registered nurse. His wife survived the shooting.

Police had no prior knowledge of the gunman before the attack, Lombardo said. "I don't know how it could have been prevented," he said.

Paddock bought multiple firearms in the past, but investigators believe the firearms were purchased legally, a law enforcement official said. The official said initial reports suggest at least one rifle was altered to function as an automatic weapon.

Chris Michel, owner of Dixie GunWorx, in St. George, Utah, recalled selling Paddock a shotgun earlier this year, CNN affiliate KTVX reported. "He talked about how he just moved closer to where we are," Michel said of Paddock. "He said he was visiting local firearms shops." Paddock lived in Mesquite, Nevada, about 35 miles from St. George.

What nails shape predict about your personality?