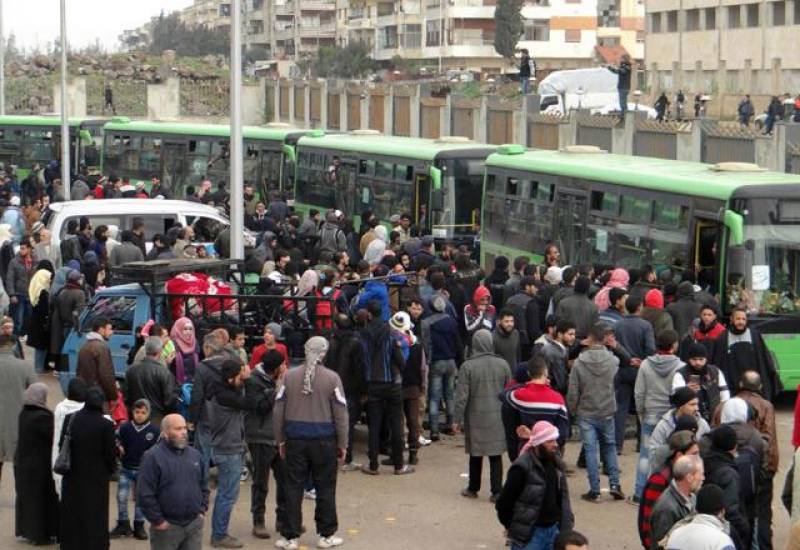 Damascus, Syria (Reuters): Hundreds of Syrian rebels began leaving the besieged Damascus district of Barzeh on Monday as part of an evacuation deal with the government, state media and a war monitor reported.

The state TV and the Observatory cited that the Syrian Observatory for Human Rights, a British-based war monitoring group, said buses had arrived in Barzeh at dawn and hundreds of fighters and family members had started to board them. More people would leave over the next five days.

A military spokesman from the Jaish al-Islam rebel group confirmed the evacuation had begun, but said his faction had not taken part in any negotiations about it. The spokesman, Hamza Birqdar, said the government had concluded the deal with a civilian committee in Barzeh.

Syrian President Bashar al-Assad has promoted the use of such evacuations, along with what his government calls "reconciliation" deals for rebel-held areas that surrendered to the government, as a way of reducing bloodshed.

However, the United Nations has criticized both the use of siege tactics which precede such deals and the evacuations themselves as amounting to forcible displacement.

Barzeh, at the northeast edge of Damascus and near the rebel-held Eastern Ghouta pocket of towns and farms, has been the site of intense fighting in recent months.

On Sunday, the Syrian army advanced under intense bombardment in the Qaboun district, which adjoins Barzeh in the same besieged enclave, the Observatory said.