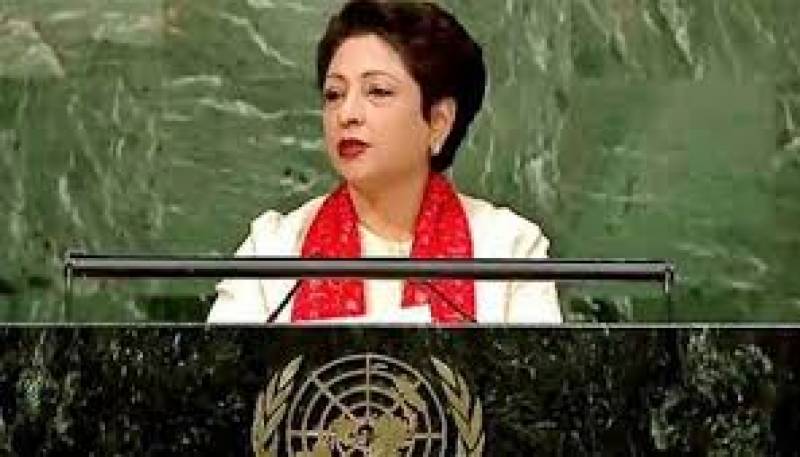 New York, USA (Staff Report): Pakistan's permanent representative to the United Nations, (UN) Maleeha Lodhi said that there can be no lasting peace in the Middle East without a just solution to the Palestinian issue.

Ambassador Maleeha Lodhi said in a speech to the General Assembly’s Fourth Committee, which deals with Special Political and Decolonization questions, “A viable, independent and contiguous State of Palestine on the basis of the internationally agreed parameters, the pre-1967 borders and Al-Quds Al-Sharif as its capital, is the only sustainable guarantee for enduring peace in the Middle East.”

“A long-term solution would also require the withdrawal of occupation forces from all Arab lands, including the Syrian Golan Heights,” she said while participating in a debate on Israel’s practices in occupied Arab lands.

In her remarks, she deplored Israel’s escalation of settlement building in the occupied territories as a blow to the peace process. “This is a tragic setback to peace, and a retreat from a two-state “solution” to a one-state “illusion,” Ambassador Lodhi said.

“Nothing is more detrimental to this vision than the illegal Israeli settlements in the occupied territories,” she added.

The Pakistani envoy said the situation in occupied land attested to a systemic pattern of human rights violations that impacted every aspect of daily life in Palestine. Arbitrary detentions, home demolitions and revocation of land rights amounted to collective punishment of Palestinians.

Countless resolutions of the Security Council and the General Assembly, this collective voice of the international community, has failed to tip the scales of justice in favour of the long-suffering Palestinians, she said. “This travesty must end,” Ambassador Lodhi emphasized.

“A just peace in Palestine is not only a matter of regional significance; it is the primary condition for global peace and security.”

The Pakistan envoy reaffirmed support to the two-state solution to the Israeli-Palestinian conflict, saying there was no alternative to that option. “A two-state “solution” remains an absolute imperative as there is no “Plan B” for the region,”she said.

“It not only restores political unity within Palestinian ranks, but also provides renewed strength and vigour to the legitimate cause of the Palestinian people,” the Pakistani envoy said, adding that the international community must help sustain this positive momentum.

“As a first step, the illegal and oppressive siege of Gaza by Israel must be lifted,” she said.

Ambassador Lodhi said last July’s tensions surrounding the holy Al Aqsa mosque were yet another reminder of the ever-present danger posed by unilateral Israeli attempts to alter or re-engineer the existing status quo in the old city of Jerusalem, and such actions must be brought to an end.

She stressed the importance of the United Nations Relief and Works Agency for Palestine Refugees in the Near East (UNRWA) in assisting Palestinians and reaffirmed Pakistan’s commitment to support the Agency by all means possible.