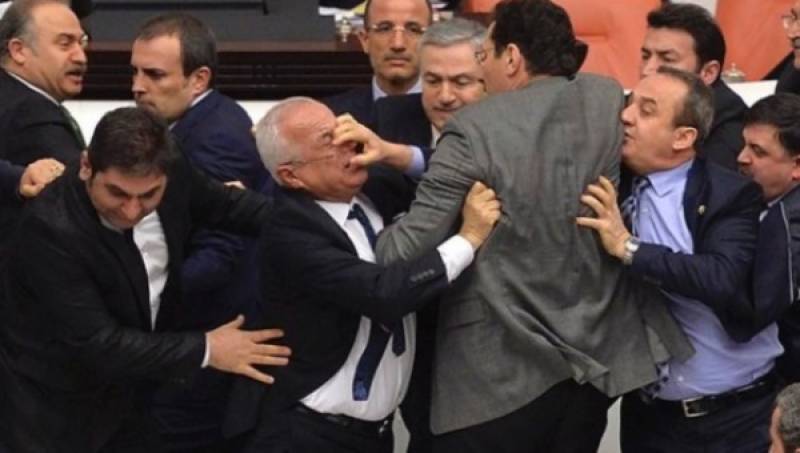 Ankara (Agencies): At least two Turkish MPs were injured as brawls erupted in parliament between supporters and critics of a constitutional reform bill.

Those hurt included a deputy from the pro-Kurdish Peoples' Democratic Party (HDP) opposition party and one from the ruling Justice and Development Party (AKP), according to Turkish media.

Pictures showed the two women being carried away on stretchers from the parliament, which is debating a second reading of the controversial bill. The scuffle broke out after an independent lawmaker, Aylin Nazliaka, handcuffed herself to the microphone on the platform at the front of the hemicycle for over an hour to protest the reform bill.

"I am chaining myself to the lectern to say no to the diktat of one man, to oppose the annulment of republican values and protest against parliament being handcuffed with this constitutional revision," she said.

AKP deputies tried to remove her, but MPs from the opposition HDP and Republican People's Party (CHP) sprang to her defence, and punches and kicks were exchanged, according to Turkish media.

One CHP deputy in a wheelchair, Safak Pavey, who has a prosthetic arm and leg, was thrown to the floor before being helped out by her colleagues, the Hurriyet daily reported. "They attacked us; it was like they lost their heads. This attack shows what awaits us once the (reform of) the constitution is passed," said Pavey, cited by the newspaper.

Erdogan's supporters say the plans would simply bring Turkey into line with countries like France or the United States, and are necessary for effective government and to avoid the need for fragile coalition governments.